Beef stock. I’m getting good at this one. My stock now feels as though it can finally pull a dish together. I’ve got the time down – 30 hours. If I put too much water in it, I just off set the lid for a little while and it will condense. Even my “seconds” beef stock is awesome.

There are plenty of directions out there for making the first round of broth. Check out here and here, both are great! But what I want to draw attention to is re-using those bones. Yes, seconds won’t be as decadent a broth, but waste not, want not(clearly, I’m an 80 year old woman). Beyond not wasting the bones for monetary reasons, I think the animals that become our food deserve the respect we can show them by not wasting their lives. Don’t waste their meat and offal. Use the bones until they don’t make a proper broth anymore!

It should be noted that not all bones are created equal. I’m not just speaking about factory farmed animals, but also the species of bones you use. For instance, chicken bones don’t always last to make a second batch. If you shoot for the 20-24 hour mark for making chicken stock like I do, the bones start to crumble into almost nothing. They just don’t last beyond that. Beef bones on the other hand are great for making a second and sometimes a third batch of broth. Use your own judgment as to when the bones are really, really done.

When and how to start

Once you have finished making your first batch of beef bone broth you can jump right into making the second batch, or you can freeze the bones for use later. Normally, I do the latter, because I get bored easily and need to switch up the proteins and types of meals. Either way, give the bones a good poke and toss the ones that are starting to get too crumbly. Some bones break down faster and won’t contribute much in the way of deliciousness. 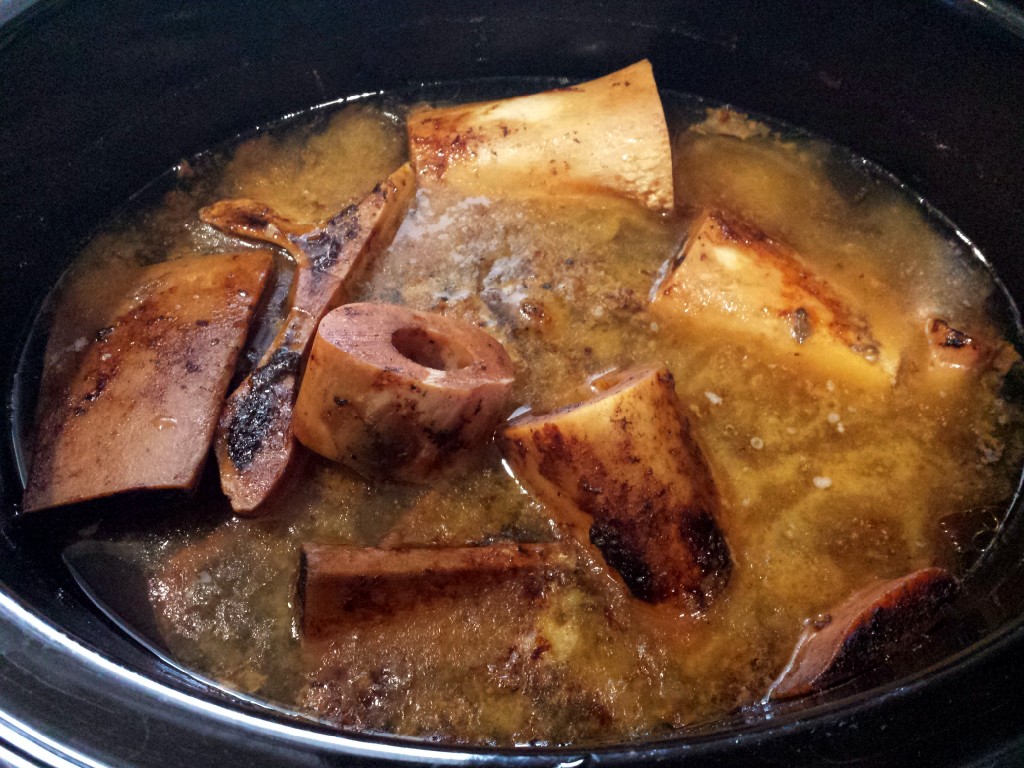 Print
Beef Stock Seconds
Author: Melissa
Recipe type: Beef Broth - Secondsies
Prep time:  5 mins
Cook time:  30 hours
Total time:  30 hours 5 mins
Serves: 2 quarts
Ingredients
Instructions
Notes
I've heard that if you let the bones sit in water for an hour with your acid of choice that it helps to draw out more minerals from the bones. I have not tasted a difference or seen data supporting this which is why I don't recommend it. If you have data to share supporting this please do!
3.2.2885

You can freeze the broth for later use. Make sure to label it with the date and the type of broth! I’ve made that mistake too often thinking I was defrosting a veggie broth and it turned out to be beef stock. If you are a canner, go ahead and can that shish! Or you can stick it in the fridge and it will last about a week, which is what I usually do. Dating and labeling fridge bound broth is a good idea as well for obvious reasons. I’ve “lost” stock in the fridge and didn’t find it again for a couple of weeks or longer. Wasted broth makes me super sad.

In case you are wondering how to use this stock beyond just making soup, here are a few of the ways I use mine: